Go to content
×
West Penwith or Belerion is the 'toe' at the far end of Cornwall, UK.
It is dense with ancient sites, and this website is all about them.
Here you will find plenty of new insights into Penwith's
rich prehistory going back 6,000 years, and the
achievements of Britain's megalithic civilisation.
For a one-page site summary, click here. 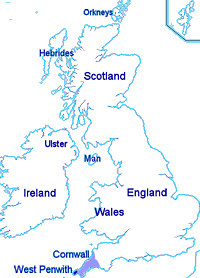 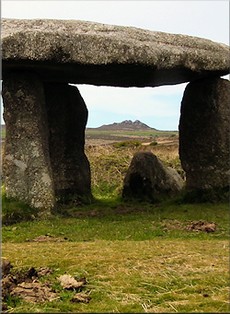 These include neolithic tor enclosures, cliff castles and quoits around 5,700 years old; stone circles, menhirs, cairns and mounds around 4,000 years old; and also carns, fogous, rounds, holy wells, early Christian crosses and churches.
In the bronze age Penwith was well known as a source of tin, gold and copper. 4,000 years ago it sat at the hub of a maritime Atlantic-coast culture stretching from Portugal to Scandinavia.
There was a system to the way Penwith's ancient sites were located and built. They were built in patterns of alignment, forming a network that knitted into an integral system covering the peninsula. This suggests their hidden purpose: a prehistoric geo-engineering project aiming to improve the ecosystem, the climate and the wellbeing of its people. A far-fetched idea? Yes. Is there evidence? Yes, here on this website.
What did the ancients know that we don't?  Here you will find evidence, maps, discoveries and thoughts on ancient sites' possible significance.
Welcome to Belerion - 'the shining land' - a name given it by Greek historian Diodorus Siculus in 60 BCE  and still pertinent today.
Text, website and most photos by Palden Jenkins. Grown on an organic farm near St Just, Cornwall.
About this site
It's about the ancient landscape and the where and why of megalithic sites in West Penwith and neighbouring areas - Scilly, Lizard and Kerrier.
It offers an approach to the area's prehistory that adds to the interpretations provided by archaeologists, with new evidence and a new optic.
It suggests why ancient sites were built and shaped as they were, proposing that Penwith's sites formed a complete system, a kind of large-scale geo-engineering project.
As in archaeology, this is a work-in-progress. Time might or might not prove these ideas correct, yet you'll find lots of stimulation here.
Penwith's prehistory has long been researched by antiquarians, geomancers, dowsers and archaeologists. This site draws on their work and adds to it.
NEXT: try this
----------
Subscribe to Meyn Mamvro
Back to content