Go to content
×
The quoits are amongst the oldest of the constructed ancient sites in Penwith, and they have a system of alignments between them. The prominent hills of Penwith served as the major landmarks in an otherwise wooded peninsula, up to later neolithic times.
So quoits, tors, hills, cliff sanctuaries and chambered mounds, and possibly springs and wells, constituted the sumtotal of ancient sites of Penwith at the end of the neolithic, around 2500 BCE. Menhirs and stone circles hadn't been thought up.
Quoits
The quoits in the northern sector of Penwith are connected by three-point alignments, usually with one extra site between them.
Click for a larger version 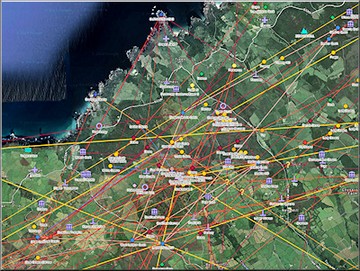 These alignments seem to be deliberately and specifically established to connect the quoits, as a subset of the wider system of alignments. On the map on the left they are pink in colour. You can get a better version of that map by clicking here.
The quoits were early sites built in the neolithic period 3600-3000 BCE, so these alignments, together with the intermediary sites on them, are probably older than most other alignments in the area. Perhaps they are amongst the first layer of alignments.
In the case of Chûn Castle, the quoit alignment passing through it from Lanyon Quoit to Chûn Quoit, as well as the proximity of Chûn Quoit to Chûn Castle, would suggest that the castle is older than the iron age hill camp it is often accepted to be.
Chûn Quoit and Chûn Castle, as seen from Carn Eanes (telephoto shot)

This is an example of how geomancy can confirm things that archaeologists suspect when they lack sufficient evidence to prove their suspicions.
There is some evidence - enclosure banks - that Chûn Castle goes back to the neolithic. It makes sense that it’s older, since Chûn Castle is in such a prominent panoramic position that it would be surprising if the ancients had no interest in it. It has one of the better panoramas of West Penwith, across the north coast and also down to Mount's Bay in the south.
In one quoit alignment, Sperris Quoit, Zennor Quoit and Lanyon Quoit are all exactly aligned. There is no accident to this - though why is this the only case where three quoits are aligned?
Both Lanyon and West Lanyon Quoits, close to each other, are major alignment nodes, but Lanyon Quoit seems to be for backbone alignments while West Lanyon Quoit is for local alignments. They had separate and complementary functions.
It's not clear whether all quoits exist for the same reasons - most of them are ruined or altered. With some quoits, such as at Bosporthennis, Grumbla and Giant's Grave, it isn't at all clear what form they originally took or what similarity or difference they had to other quoits.
But they are mostly connected by alignment, and this means that their builders thought of them as a group of quoits, not just as individual quoits built by competing tribes in different areas. This is an integrated system.
More on quoits here.
Maps on this page courtesy of Google Maps and Terrametrics
NEXT: Significant Hills
Back to content