Go to content
×
Network Nodes
Now we come to examining the major alignment centres that have emerged into prominence in the making of the map.
Foreground: Trencrom Hill. Background: Carn Brea 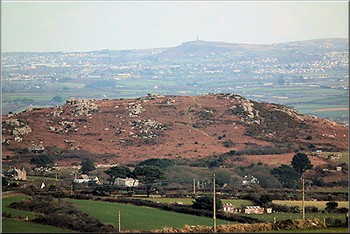 Carn Brea
Carn Brea, near Camborne, is known archaeologically as a very ancient and major site, going back at least to 3700 BCE in the neolithic period. Judging by the alignments found to connect it with key sites in West Penwith, and remembering that it sits on the Michael Line (connecting Avebury, Glastonbury, the Hurlers and Carn Lês Boel), Carn Brea seems to be rather like a geomantic switching point between West Penwith and upcountry.
Alignment 80, a ‘backbone’ alignment mentioned on the preceding page, goes from Carn Brea to Trencrom Hill, then to Lanyon Quoit and then to one of the outlying cairns in the Tregeseal complex (Botallack Common tumulus), connecting four significant sites. Amongst other factors, this alignment defines the positioning of both Lanyon Quoit and the Tregeseal complex - since the other two major sites on the alignment are hills, pre-existing the constructed ancient sites.
A similar alignment, 108 (also mentioned previously), goes from Carn Brea to St Michael’s Mount, then to the Merry Maidens and on to Treryn Dinas (Logan Rock). Four major sites in an exact straight line – that’s what's meant by a ‘backbone’ alignment. Since three of these sites are prominent natural features, this implies that the Merry Maidens stone circle is located where it is in order to strengthen this alignment and in some way to enhance or make use of it.
Not quite so simple though
But it doesn’t always work simply. A hypothetical line from Carn Brea to Boscawen-ûn passes through no other sites at all. So, for some reason, there is no connection or it cannot be verified. Progress it onwards and it arrives a little south of Pordenack Point. 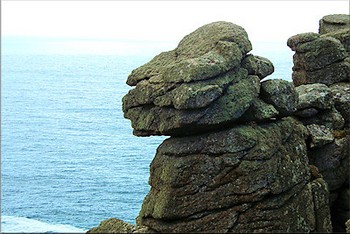 This location might be the greatest single site for simulacra (rocks that look like beings) in the Isles of Britain. But it isn’t a specific site, being more like a natural theme park of archetypal rock-sculptures spanning a few hundred yards. They're like guardians of the Isles of Britain, looking out over the Atlantic. Potentially this is an exciting alignment, but it doesn’t quite click. It doesn’t qualify as an alignment.
Many are the times I have chosen a significant site, found some likely destinations for potential alignments from it, but nothing is there, or it just doesn’t fit. Then at other times, in contrast, an alignment jumps out in an almost attention-seeking way.
So there isn't a uniform logic to alignments in West Cornwall. They aren't all completely interconnected. Yet there are signs of a coherence and rationale pervading the alignments system, and there must be meaning to this.
Some evenings I sought to discover new alignments and it just didn’t work. Other evenings three alignments would appear in quick succession, appearing and 'clicking' easily. It was an unpredictable process.
Nodes
Boscawen-ûn

It’s not just hills, stone circles and quoits that act as major nodes. Notably, some cairns (such as Lower Numphra, Tregiffian Vean and Bosiliack Barrow) and some menhirs (Carfury, Pipers NE and the Drift menhirs) are quite major alignment nodes.
Perhaps these particular sites are specifically placed where they are as nodes, switching-points or exchange-points, even circuit junctions – in distinction to being source or destination points.
There's no clear rule about what makes a major node. Stone circles are undoubtedly important nodes. But look at quoits, and one or two are major alignment nodes (Lanyon and West Lanyon Quoits) while others aren't.
Most menhirs have one, two or three alignments intersecting them, while others are definite network centres with far more alignments - four, five, six or seven. So sites such as menhirs can have quite variable significance in the wider alignment system.
Accuracy
As mentioned earlier (here), different people’s perceptions yield rather different results in the discovery of alignments. But the deciding factor is the accuracy of alignments and also a fair judgement of their plausibility in each individual case.
Quality is more important than quantity, and it is important not to undermine this research work by adding weak or inaccurate alignments. The core aim is to try to gain a good and true a picture of the megalithic mindset and worldview, through studying the traces the ancients left behind.
One case in point is three-point alignments, which must have some sort of plausibility to be accepted as valid alignments. Careful judgement is needed. However, the omission of plausible three-point lines because of the rigid application of four- or five-point rules should also be practiced with caution.
In Penwith, three-point alignments have proved to be valid in some cases. One indication of validity is the kind of sites they connect, together with a bit of geographical sense. To give an example, the alignment of Mulfra Quoit, Bosiliack Barrow and West Lanyon Quoit (alignment 138) makes clear sense, all three sites being roughly the same age and lying in the same local sector of landscape. So this is a plausible three-point alignment. But others, which don't share the same plausibility, have not been added to the map.
Next, a new section outlining discoveries made while making the map.
NEXT:  Research Findings
Back to content