Go to content
×
Some ancient sites need their dating to be reassessed. This affects cliff sanctuaries in particular, but also some iron age rounds and hilltop camps (hillforts).
Locational issues
Carn Kenidjack from the gateway to Chûn Castle 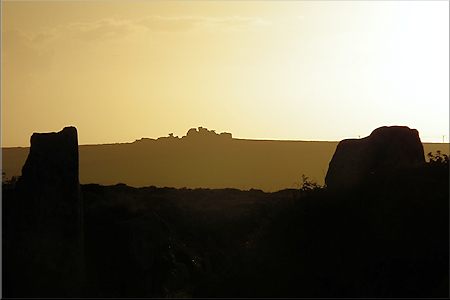 The landscape of Penwith has a kind of logic to it, though it’s an organic or poetic logic. On this site it has been shown how straight alignments between certain major sites can determine the siting of other ancient sites.
All sites, big and small, are co-located to form interconnected relationships with each other, as a network. Sites on any alignment are thus in some way wired to each other.
Other factors such as underground water and overground energy-lines, astronomical and landscape variables come into play - such as site intervisibility, the panorama from any site or its setting in the landscape. A few of these qualities seem to be present at every site - though sites vary.

Every ancient site is located where it is for a distinct reason, and with this research we’re moving an inch closer to understanding what that reasoning and system of thinking might have been. What we see in Penwith is a network where all individual sites are plugged into the network through alignments, and also through overground energy-line contact and other geomantic factors.
The presence of a significant number of astronomical alignments and orientations indicates that this network was plugged into the cosmos as well as the ground. These orientations concerned the observation of periodicities and the passage of subtle time, with its peaks and cycles. This focused particularly on the cycles of the Moon, the annual cycle of the Sun, the eclipse cycle and probably the motions of the planets.
Meanwhile terrestrial factors, such as ancient site alignments and underground water, concern the way that energy is distributed across space. So the interactions of time - the cosmos - and space - the landscape - come to meet in concentrated format at certain ancient sites.
Questionmarks
Questionmarks have been inserted on the map at places where there seems to be an exact multiple intersection of alignments and there is no known ancient site there. These points might or might not yield newly-discovered locations for destroyed sites, but they are worth investigating.
There are plenty of multiple intersection near-misses, but when they are exact it's worth taking a closer look. 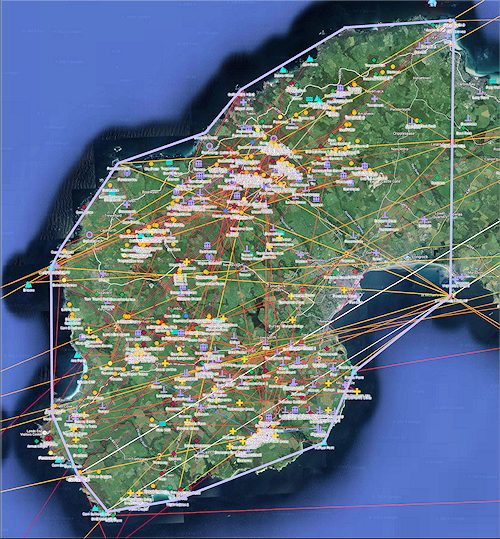 Gaps in the distribution of sites can be worth investigating too. Looking at the distribution of cliff sanctuaries around the peninsula, there are three locations where, looking at the overall pattern, cliff sanctuaries should be found there.
This would round out a complete pattern of cliff castles around West Penwith. Of course, such a pattern might not exist. But looking at the string of castles from Gurnard's Head to Treryn Dinas, plus St Michael's Mount and St Ives' Head, the pattern and the gaps are noticeable.
Four cliff sanctuaries are not usually listed as cliff castles. They are highlighted by the multiple alignments that lead to them, as well as by their position and, in the case of the first two, their name - both called Pen Dinas. These are St Ives Head, Pendeen Watch, Cape Cornwall and Tol Pedn Penwith (Gwennap Head). These four differ from the three sites mentioned above since there is evidence of their use as cliff sanctuaries.
Archaeological layers
Aside from wanton destruction of ancient sites by landowners and builders over time, there’s also the problem of the recycling of sites and materials, obscuring former sites. This comes up in towns and villages: is there more underneath Penzance, St Just, Pendeen or St Ives than we know about?
It also concerns old churches and early Christian crosses, as well as some iron age ‘hillforts’, some of which are located on top of older sites. Ludgvan, Gulval and St Buryan churches sit on top of iron age rounds, now containing their churchyards. Iron age Chûn Castle sits on top of a neolithic hilltop site. Trencrom Hill has remains of iron age occupation on top of a neolithic tor enclosure. 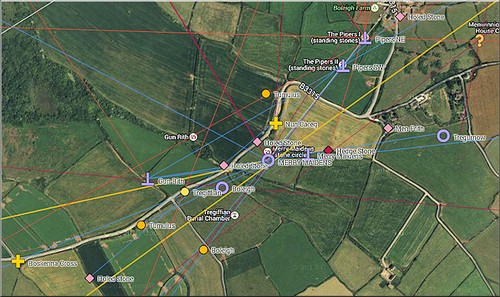 Many old Christian crosses and churches in Penwith fit neatly into the megalithic alignments system. With the early Christian crosses that are part of the Merry Maidens complex, or the crosses at Crows an Wra and Brane, one wonders whether they were newly put there in the Dark Ages or whether they replaced former menhirs.
This raises the general question of how much churches replace earlier sites, or and how much they were built afresh, adhering to similar locational principles as those of the megalith builders.
Maps on this page courtesy of Google Maps and Terrametrics
NEXT: Earth Energies
Back to content