Go to content
×
The prominent hills of Penwith originally served as the major landmarks in an otherwise largely wooded peninsula, up to late neolithic times.
Quoits, tors, hills, cliff sanctuaries and chambered mounds, together with springs and wells, constituted the sumtotal of ancient sites of Penwith at the end of the neolithic, around 2500 BCE. 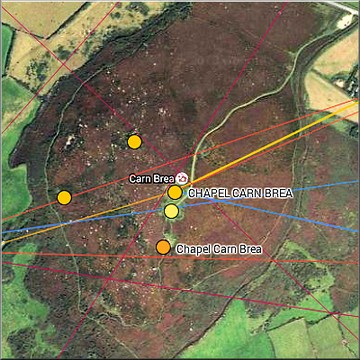 Hills and alignments
It’s quite common for alignments to pass over significant hills at a variety of different points, not just at one single summit point. This is demonstrated at Chapel Carn Brea (see left) or at Sancreed Beacon, Cape Cornwall or Carn Galva. Alignments tend to head for different parts of the hulk of the hill, or toward certain points on it such as tumuli.
However, on some hills with a definite hilltop site on them (such as the enclosure at Bartinney Castle), the alignments do pass through one point. All alignments head for the centre or the periphery of the circular enclosure on the top.
Carn Galva, a neolithic tor enclosure, is narrow and emphatic in profile when seen from the Nine Maidens stone circle but, when seen from the southwest from Watch Croft or from the northeast from Zennor Hill it is a long serpent hill with two main humps.
So, in one direction there is a clear profile for alignments to align to, but in the other direction there is a range of crossing points - including the saddle between Carn Galva's two peaks. Transverse alignments tend to cross Carn Galva either at the NW or SE peaks or through the saddle. 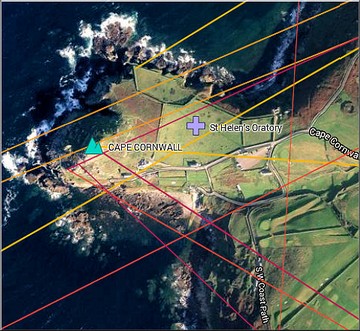 At Cape Cornwall, alignments seem to pass over or to stop at different places on the hill, though they definitely do hit the hill, half way up or higher (see right), and mostly at rock features.
At Gurnard's Head, St Ives Head and Godolphin Hill there seem to be distinctly two spots where alignments meet. I’m inclined to accept this as given rather than regard it as an inaccuracy. Yet at St Michael’s Mount, the alignments seem to be very exact, all converging on one point.
Two hills have a standing stone situated a little away from the summit. These are Carn Eanes and Watch Croft. In the case of Watch Croft, Penwith's highest hill and a bulky though relatively smooth convex hill, the standing stone is located down from the summit where it can be seen from below the hill, close to Mên Scryfa and Mên an Tol. But the menhir on Carn Eanes seems to have a life of its own, located 230 metres from the summit of the carn, though located on the hulk of the hill.
So alignments have a variety of ways of meeting up with prominent hills. Nevertheless, hills, tors, outcrops and offshore rocks are important in Penwith's geomantic system, as are cliff sanctuaries on headlands. They were there first sites, acting as a basis, a natural framework, on which the whole system was built.
Maps on this page courtesy of Google Maps and Terrametrics
NEXT: Location and Dating
Back to content