What is all this stuff about earth energies? How does it all work?
The well on the top of Trencrom Hill 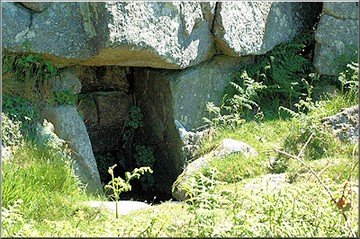 To understand earth energies we must pull back and step off Earth. The holistic viewpoint, as embodied in Lovelock’s Gaia hypothesis, sees the Earth as a living, breathing being, an intelligent entity.
If we see the Earth as a physical body inhabited with an energy-body and a psyche operating on a variety of levels, even with a soul, then that energy-body can be seen as a hologram of interlocking energy-fields that pulses and twangs perpetually, forever changing in temporal patterns and affected greatly by the motions of the Sun, Moon and planets.
The Earth's crust and its landscape is a shell and sheath for a massive bundle of paisley-like swirling energy-fields that is the Earth as a being. It is a subtle, resonating, reverberating bundle comprised of gravitational force, light, photon, electromagnetic and subtle energy in a multitude of wavelengths which also include feelings, thought and consciousness.
Energy flows in patterns and streams, along the line of least resistance. It is both energy and information. It conveys the intelligence of the world, akin to a nervous and brain system of the planet.
Earth is part of a flattish solar system made up of the Sun, three enormous planets, a number of smaller planets including Earth and some minuscule ones, together with even smaller lumps and bits hurtling around, plus a lenticular body of dust and gas, all irradiated by energy pulsing from the Sun.
This solar system moves, breathes and resonates continually and rhythmically. The positional relationships of the planets to each other modulate and reflect the dynamic energetic fields of the whole system – these energies ripple, hum and sound out in perpetually changing permutations.
The Merry Maidens as seen from Gûn Rith

It’s what Johannes Kepler called ‘the music of the spheres’ – sound being analogous of the full spectrum of wavelengths involved. Sound is a carrier-wave also conveying thoughts, emotions and deeper imagery and experiences. Similarly with subtle energy, it's a carrier-wave too.
Each planet is a thrumming sphere, and even a crusty planet like Earth is more flexible and resonant than we usually imagine - even the rocks and soil are tidal. This crust acts as a kind of amplifying sound-box, rather like that of an acoustic instrument – hence that earthquakes can be detected at the other side of the world. The Earth’s basic pulse or frequency is around eight cycles per second, but there are sub-frequencies and multi-levels to this too.
The Earth has needs and preferences, feelings and thoughts, a sense of identity of its own and a soul-like core – and it has perpetually-changing relationships with other planets. It breathes and pulses in ever-morphing patterns and permutations. (Get the lowdown on this in my book Power Points in Time.)
Energy arteries
So the Earth dings and dongs like a bell, multi-level, at times harmoniously and at times jarringly, with varying degrees of signal and noise that change over time.
This planetary resonance breaks down into intricate localised patterns, circuits and flows, analogous to the blood-distribution and nervous systems within our bodies. There's a complex tidal flow to it, coursing through the meridians or energy-lines of the Earth, some of which are straight, some sinuous, some big, some small, some above ground and reaching out into the far reaches of the magnetosphere, and some under the ground, shallow or deep.
Braving the winds on Carn Lês Boel after an energy-raising session 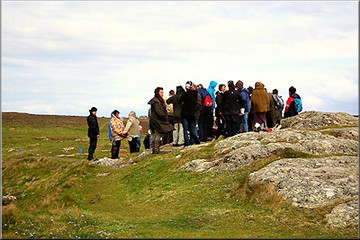 Water is a major energy conductor – hence the relationship between underground water and energy lines and patterns. Certain kinds of ancient site, particularly standing stones and stone circles, plugged into this subsurface energy, act as energy conductors between the heavens, the atmosphere and the surface and depths of the Earth.
This is what we loosely call ‘earth energy’. Trouble is, we haven’t really identified and agreed on a more specific description than this, because we’re talking about different frequencies, shades, levels, voltages, colours and sounds. This understanding is yet to come.
Energy is what we sense when we visit ancient sites – subtle energy that brings a smile to our faces and makes a day memorable. Spending time at an ancient site and letting ourselves become changed by it is a good and gratifying thing to do. It has a mysterious pull, and for many of us it’s a healing and growth process.
The people of the megalithic era knew something that we don’t - something to do with energy engineering. The theory goes that they sought to render their world more fruitful, enchanted and safe. Perhaps they sought to build a kind of 'heaven on earth’, seeking for perfection, or at least trying to make a better life for themselves. They saw it to be in their best interests to do this.
Mulfra Quoit from the Nine Maidens stone circle 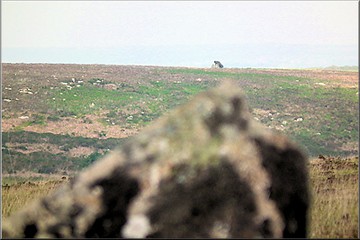 Cultural shift
This energy-engineering seems to have been their main interest in the neolithic and early bronze ages, between about 4500 and 1500 BCE - and over that 3,000 year period tremendous changes took place.
Human consciousness slowly changed as agriculturally-based village life and increasingly complex social systems developed: people were becoming more self-oriented, by degrees less in tune with their world, feeling less part of it. They were building up the cultural and psychological content that was becoming a distinct human world - a psychosphere or, as Teilhard de Chardin called it, a noösphere. They also became increasingly able to engineer, alter and fix the Earth, the ecosphere and energy-sphere.
They started staking out territory, to make it their own. Over time, they started imposing more strongly on their world and on each other. This at first was based on a largely collaborative attitude toward nature - one where humans took it upon themselves to tweak and alter nature, to enhance its potential. The golden age of the megalith era took place in this phase.
Then came a change in the late bronze age. Inequalities, rivalries, territoriality and rivalry increased, earlier principles were eroded and, around 1200 BCE, it seems that the old magic was broken - a crisis and change took place. Stone circles, standing stones and mounds were no longer being built, and after that we see more settlements, defensive or property-based structures instead.
Many of the principles developed in an earlier age continued, yet they morphed from innovations to traditions. These traditions survived another 2,500 years into the Middle Ages, with a mortal decline around the time of the Black Death and the arrival of the modern era, where a secular sense of separateness, both from nature and from each other, became the baseline of our collective reality. Wonder was incrementally replaced with reason as the modern era took hold.
This long process involved a loss of knowledge that now we seek to reclaim, through such pursuits as geomancy and many other related fields. But the difference now is that we have seen both sides of this euation, and we are wiser and more knowledgeable for it.
Reclaiming the Neolithic
Treen Common bronze age entrance mound 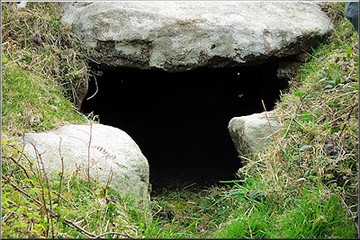 The vision that John Michell clarified in his seminal 1969 book View over Atlantis was one where ancient people had a deeper and wider connection with the subtle realms, manifesting it in their architecture and works.
John Michell uncorked the geomancy bottle, setting thousands of people on a path that still has a long way to go. He changed many of his ideas as time went on and revised the book in the 1980s, yet his essential vision didn’t change. Around 1970 his work The Old Stones of the Land’s End Peninsula arose out of serious field research he did around that time to demonstrate his point about straight alignments between ancient sites.
The alignments he discovered around 1970 hold up well - they were accurate and only one or two have failed the accuracy-checking we have done recently in this map project. His discovery of the Michael Line spanning southern Britain has endured the test of time too.
Dowsers like TC Lethbridge (Patterns of the Past) and Tom Graves (Needles of Stone) were more specific, identifying energy flows and spirals at particular sites and making us aware that such sites processed energy not just in a sacred context but also in a scientific and technological one. These monuments did things, and they still do.
Professor Thom, John Neal and others analysed the geometric and metrological sophistications of ancient sites and their megalithic science. It was demonstrated that the ancients understood complexities such as the precession of the equinoxes and the heliocentric solar system. They worked with the golden mean, the phi ratio and complex numbers.
They were capable of tricky engineering exploits. No doubt, by extension, they were also skilled in such things as natural medicine, husbandry, seed improvement, maritime travel, metal streaming, mining and smelting, craftwork and many other advanced activities.
What is important to us today is not to strive to go back to some pristinely idealised time - which it wasn't, and life was hard then too - but to dredge up this knowledge again for re-application in the 21st Century and beyond, for the benefit of the planet and all who live on her today.
NEXT: The Isles of Scilly
Back to content