Go to content
×
This page is about the northern and southern custers of ancient sites in West Penwith. It also looks at the question of possible tribal areas in the peninsula.
Clusters 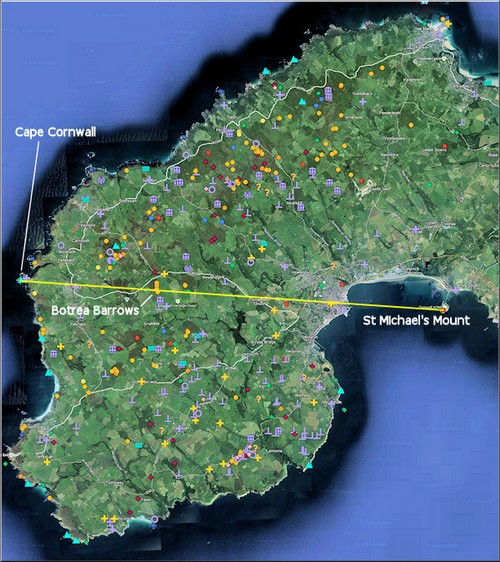 Standing back and examining the map, one thing quickly emerges: the overall distribution of ancient sites in Penwith is focused in two main zones, clusters or concentrations, separated by the line you see on the map between St Michael's Mount and Cape Cornwall.
These two zones are:
Nowadays the south is by degrees more agricultural and arable than the north, and in the neolithic and entering the bronze age, between roughly 4500 and 2500 BCE it will have been more densely wooded than the north.
There is a distinct gap between these two halves, marked by the alignment mentioned above. It can also be construed to have a ‘hinge’ connecting them, going approximately between the Botrea Barrows and Caer Brân (there is an ancient trackway between the two).
Click to enlarge 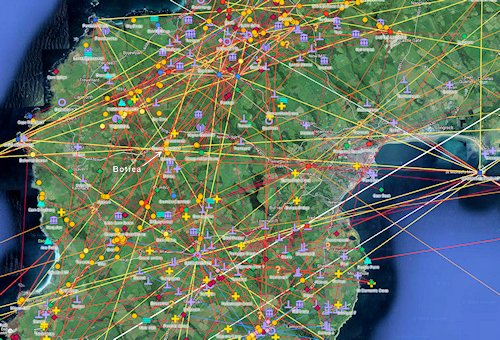 The Botrea Barrows are today not greatly exciting to visit, and the hill they are on is now a moorland when once they would have been more fertile and homely than today. These barrows are a ceremonial site from the early bronze age.
The alignments intersecting this site suggest that these barrows are far more important than customarily believed - they form the intersection of four major backbone alignments.
They are wide and low kerbed platform barrows today – probably higher in former times – and they're covered with heather and brambles and generally ignored. Yet they lie on backbone alignment 77 between Cape Cornwall and St Michael’s Mount and a few other backbone alignments, and they seem to act as a hinge or axle for the whole peninsula, connecting the northern and southern clusters.
This 'hinge' also highlights Caer Brân, another ceremonial place just over the valley from Botrea. Elsewhere on this site it is suggested that Caer Brân might have been a kind of parliament site for the peninsula, or a neutral henge-like space at the centre of Penwith. Whatever is the case, these two sites are in some way twinned or connected in their purpose.
There are four surviving stone circles in Penwith. Two of these are in each zone – Tregeseal and the Nine Maidens in the northern half and Boscawen-ûn and the Merry Maidens in the south. The other stone circles have been destroyed (such as at Tregurnow and Trevorian in the south and Rosemergy in the north, or they have been tampered with and modified, such as at the former stone circle at the Mên an Tol in the north. This rather iconic site was modified just over a century ago by a zealous antiquarian. In ancient times it was some sort of stone circle, and you can see some of its stones if you look around Mên an Tol.
These two clusters in the north and the south indicate two slightly different worlds within Penwith. In warmer times, particularly the neolithic, the upland north was the place to be, but as the the climate cooled and forests were increasingly cleared in the earlier bronze age from 2500 BCE onwards, for domestic and increasing metalworking purposes, the south became more prominent.
The peoples of north and south were still probably related to each other. Judging by alignments between north and south, and many other patterns of ancient sites in the peninsula, this division does not look as if it was major or 'political' though - it demonstrates simply a marginal difference between the northern and southern areas, and perhaps a differing sequence of developments between the two between the neolithic and bronze ages.
Click to enlarge 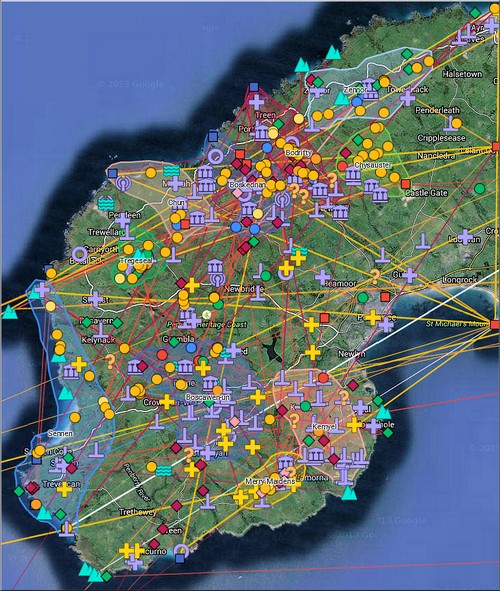 Tribal areas?
As a speculative exercise, I have identified various sub-groupings of ancient sites and areas which might perhaps be regarded as the territories of different extended families or tribes.
On the main online map, these become visible if you go to the bottom of the list of sites and alignments on the lefthand side, then tick the box Notional Tribal Areas.

These areas identify ten groupings - though I suspect John Michell might have preferred twelve! There might also be fewer.
They are simply notional groupings, reflecting patterns of ancient sites and settlements on the map.
There are no written records or traditions concerning ancient tribes in Penwith, so nothing is known about them. Nevertheless, there will have been some sort of overarching tribal or clan structure to Penwithian society in ancient times, simply because the peninsula is quite small.
From north to south, these ten groupings are:
These notional areas outline clusters of ancient sites in Penwith. If any reader can improve on them, you're welcome!
All maps on this page courtesy of Google Maps and Terrametrics
NEXT: Empty Areas in West Penwith
Back to content