Go to content
×
This page reports a key discovery made in this research: backbone alignments.
These alignments demonstrate that there is an integrated system covering West Penwith. They also govern the location of key ancient sites such as the stone circles. The backbone alignments go back to around 3700 BCE in the neolithic period.
It is a surprise that the backbone alignments of ancient sites in Penwith were not discovered earlier. The discovery process began with a hypothesis I work with, that prominent hills and cliff sanctuaries or castles, as natural landscape features, form the basis and foundation of ancient site alignment systems.
Not all students of alignments agree with this, even including the late John Michell (author of the seminal book The Old Stones of the Land's End Peninsula), who did the first proper survey of alignments in West Penwith around 1970.
Yet the hills and cliff sanctuaries were among the very first sites that were special to the people of neolithic West Penwith in the 3000s BCE, when Penwith was untamed and forest-covered - they gave people an opportunity to get out of or above the forest. Having lived in a densely-forested country (Sweden), I understood the importance of this. Endless forest dominated neolithic Britain.
On a hunch, I looked for an alignment between St Michael's Mount and Cape Cornwall, and the saga started there - the process is described lower down this page. You can see the backbone alignments that have thus far been identified by downloading this map or by visiting a Google Maps version here.
So what are backbone alignments?
They are major alignments, generally involving smaller numbers of sites than most ordinary alignments, but the sites they do connect are very important ones. Backbones seem to form the main 'circuitry' of an area like West Penwith.
Generally they pass through at least three major sites, with at least one, two or three of them being significant natural features such as neolithic tors or cliff sanctuaries. They are strongly involved with the siting of Penwith's stone circle complexes.
Key backbone nodal sites in Penwith are Lanyon Quoit, St Michael's Mount, Boscawen-ûn stone circle, Cape Cornwall and Botrea Barrows.
What is their significance?  'Backbone', an internet term, refers to the main fibre-optic 'pipes' connecting nations and regions - in distinction to local circuits and distributary branches of the system.
They're analogous to high-tension power cables on the national grid, operating at a high voltage to reduce energy-loss over long distances. This power is then transformed to a lower voltage to enter local distribution networks.
It can be argued that backbone alignments act as a primary energy-system in Penwith, serving as a matrix upon which the complete system works. Major sites then perhaps act as transformers, redistributing to lesser sites.
It might also be argued that the cairns and menhirs that form complexes around stone circles act as buffers, fuses or voltage-regulators for the stone circle complex as a whole.
However, remember that these are but analogies - they don't sufficiently explain how or why the backbone system works.
Also, to remind you, alignments or 'leylines' seem not to be actual lines and must not be confused with the energy-lines that dowsers pick up. Ancient sites are simply aligned with each other, but they have no connecting 'pipe' between them - they seem instead to work according to a principle of non-local quantum entanglement. The lines we draw on maps are simply lines to indicate alignments and to test their accuracy.
How it started
On a hunch, I examined St Michael's Mount to see whether there was an alignment to Cape Cornwall - since as conical hills in a marine setting, they have similarities. Indeed I found an alignment, and it just so happened to pass through the bronze age Botrea Barrows on the hill just above my home!
This alignment gave these barrows on Botrea Hill new significance. It also passed through nearby Caergwidden Round, generally accepted to be an iron age round. This was something of a eureka moment.
To understand the next bit, see the backbone alignments map.
Then I started looking for similar alignments and, before long, a number were found radiating from St Michael's Mount. Three in particular were clearly powerful ones:

Something was going on. This led to a more systematic examination of prominent natural features - hills and headlands. What emerged was that certain sites usually not recognised as cliff sanctuaries indeed are so - such as Cape Cornwall, Pendeen Watch, Tol-pedn-Penwith and St Ives' Head. This is verified by the magnitude and pattern of backbone alignments passing through them. All of these have now been confirmed as cliff sanctuaries (thanks, Craig Weatherhill). Click here for a cliff sanctuary map.
The siting of key ancient sites
The major megalithic sites of Penwith are clearly located where they are by using this framework of alignments. This was a significant discovery.
Take, for example, alignment 80, which starts at Carn Brea, passing through an iron age enclosure at The Hood in East Penwith before hitting Trencrom Hill. Then it passes exactly through Lanyon Quoit and Boswens menhir before intersecting the Botallack Common cairn in the Tregeseal complex, and finally ending at the Brisons, some offshore rocks just off Cape Cornwall. This alignment was clearly a key factor in placing the Tregeseal complex where it is.
Some backbone alignments would not normally be acceptable to geomancers - for example, alignment 103 passes through only three sites. Geomancers avoid three-point alignments, regarding them as inconclusive.
But alignment 103 is evidently a backbone alignment because of the three sites it connects:  St Michael's Mount, Lanyon Quoit and Pendeen Watch (another cliff castle).
Here we come to Lanyon Quoit and its key positioning. We have already seen that it lies at the intersection of alignments 80 and 103. There's more.
Look at alignment 37: it starts at Treryn Dinas cliff castle, passing through Boscawen-ûn stone circle, Goldherring 2 Barrow, Newham Farm menhir, then through Lanyon Quoit, and then Bosiliack Barrow (a neolithic chambered barrow), finally ending at the Nine Maidens NW menhir (a menhir in the Nine Maidens stone circle complex).
Backbone alignments map:
as a JPG image or on Google Maps 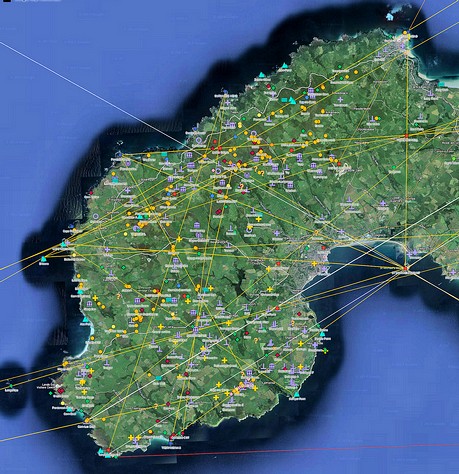 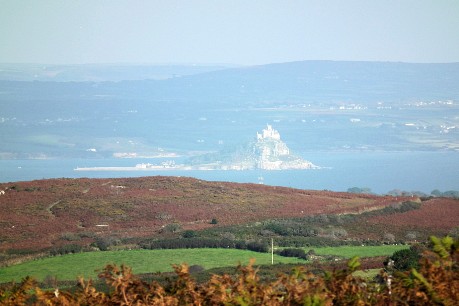 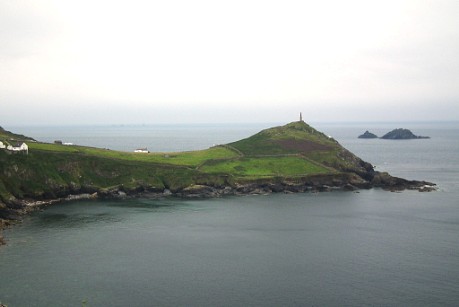 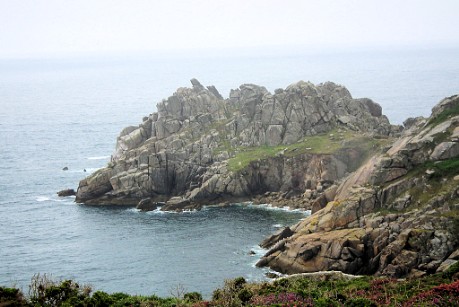 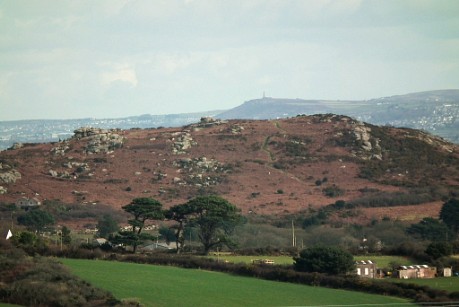 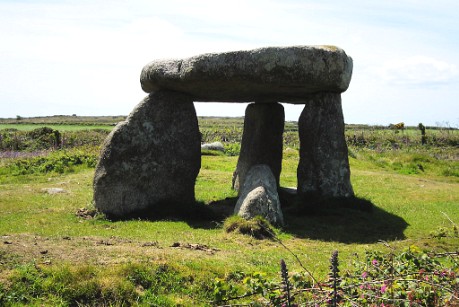 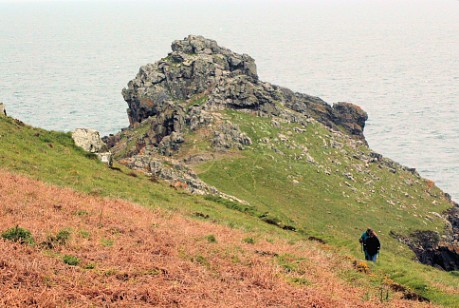 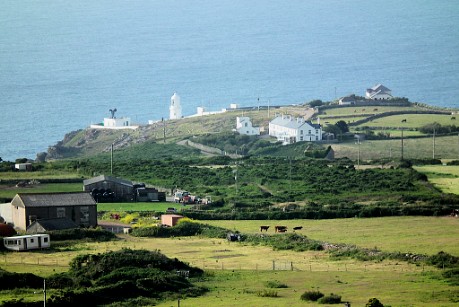 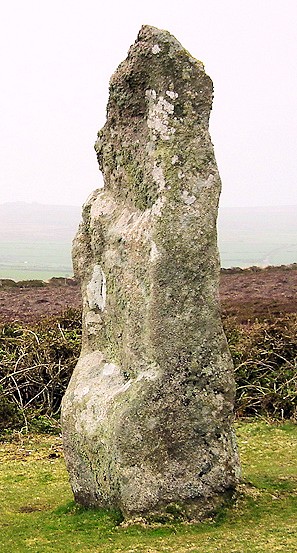 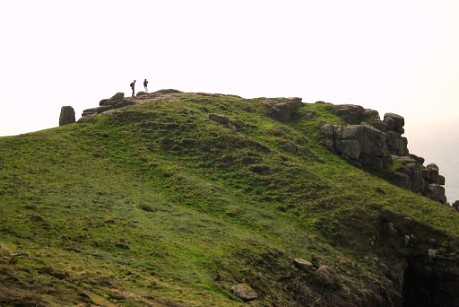 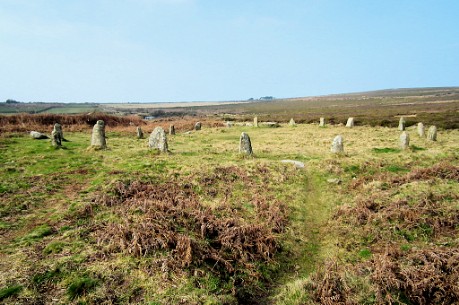 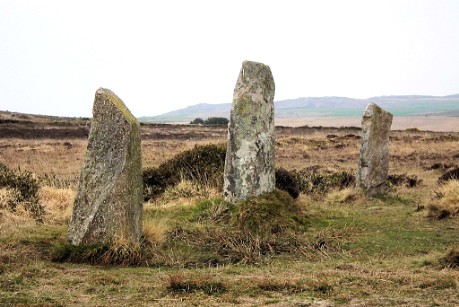 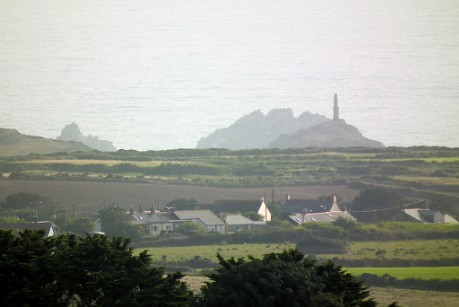 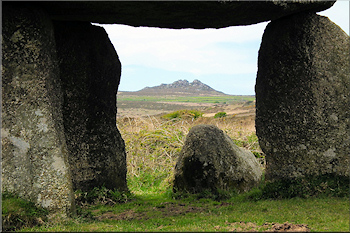 So Lanyon Quoit is located at the intersection of 103, 80 and 37, and that's why it's there. Lanyon Quoit was built around 3700 BCE, which implies that these alignments must be the same age or older. It also implies that the cliff castles and tor enclosures are of a similar age.
It's worth noting that major alignments such as the backbones don't always go straight to stone circles. Sometimes they go to outlying menhirs or cairns that are part of a stone circle complex - as with alignments 37 and 80 above. This shows how a stone circle complex is important as a whole - the stone circle should not be considered in isolation.
Sometimes a major alignment goes straight through a stone circle. Alignment 108, mentioned above, passes through the Merry Maidens.
Boscawen-ûn is placed at its precise location at the intersection of five alignments:  97 and 78  (both going to the Scillies) and  79, 93 and 37 (all connecting with cliff sanctuaries in Penwith). Take a look at the backbones map to see its nodal centrality in the backbone system.
Cape Cornwall has at least five backbone alignments going to it or through it. Trencrom Hill is visited by four. Botrea Barrows act as a node for four backbones.
Implications
First, an overarching locational system for the whole of Penwith has now been found. This means that no ancient site in Penwith can be considered in isolation - it is part of a complete system.
Gurnard's Head with Pendeen Watch behind 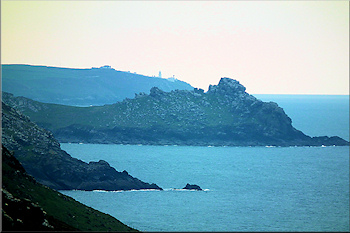 Second: cliff sanctuaries or castles. Cliff sanctuaries are usually regarded as iron age, dating from around 300 BCE to CE 100. But the backbone system is neolithic and staked out on the cliff sanctuaries and the neolithic tor enclosures - so cliff sanctuaries are really neolithic in origin.
The archaeological remains at cliff sanctuaries indeed were built in the iron age, though on clifftop sites used in the neolithic. This is also the case on inland hills such as Chûn Castle and Trencrom Hill - both iron age 'hillforts' that sit on top of neolithic remains.
Cliff sanctuaries thus prove to be far more important than previously understood, and older in first use. They act as major nodes on the coastal periphery of the Penwith system, giving the backbone system structure. Key to this is St Michael's Mount, which seems to be the 'transformer' for the peninsula, judging by the backbone alignments passing through it - though Carn Brea near Redruth is very significant too.
The backbones link up prominent natural features that were important from the very beginning of the megalithic period in the neolithic around 3700 BCE. They also link the stone circles, which officially go back to the bronze age around 2200 BCE. However, I would date them as late neolithic, around 2600 BCE (as a result of date-dowsing work I've been doing). Not only this, but before they were constructed as stone circles, they might possibly have been recognised as sites since around 3700 - because they are so intimately involved with the backbone alignments.
Third: dating. The backbone system as a whole must have been established around the mid-neolithic, around 3700 BCE. The major clue is Lanyon Quoit, built around that time, the location of which is clearly defined by the three backbone alignments passing through it. Secondarily, the neolithic tor enclosures, also built around 3700, back up this dating.
Treryn Dinas cliff sanctuary 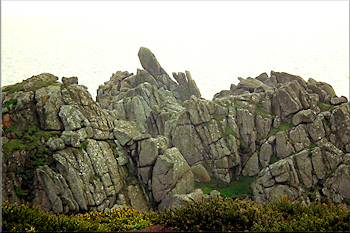 Fourth: topography. A relationship between topography - hills and headlands - and the spatial distribution of ancient sites in Penwith is now established. This relationship might seem self-evident, but it has not been clearly demonstrated before in West Penwith.
Fifth: the chicken possibly did come before the egg. There is an ongoing debate amongst dowsers and geomancers about earth energies: it has been found that earth energies can respond to the building of sacred sites by moving small distances toward a sacred site when it is built. Thus the question arises, were ancient sites built because energy was already there, or was energy generated by the building of the sites? The answer is probably a mixture of both, and this needs further research.
However, the backbone system, being anchored to natural features, suggests that energy was there before humans came along, and that the people of the neolithic period identified it and did something with it. They used the cliff sanctuaries and tor hills as nodes in a grid the structures the complete array of megalithic sites in West Penwith.
Thus, while the above 'what came first?' question is not conclusively answered with this finding, the evidence swings in the direction of already-existing energy fields, connected with prominent natural features. Certainly, cliff sanctuaries and neolithic tor enclosure sites are inspiring places today.
Conclusion
Thus far, this is the biggest discovery made during this mapping project. It demonstrates that the builders of the ancient sites of Penwith had a grand plan. If it wasn't a preconceived plan, they certainly followed a logic with some consistency to it, as ancient sites were built and the whole system we see today took shape over a period of centuries.
The backbone system gives the ancient sites of Penwith a new coherence - evidence that the system as a whole operates as a wholeness. There's more to research in this question.
NEXT: Double Menhirs
Back to content